My wife recently offered me the latest Raspberry Pi 4 (model B) 4GB. So I was really excited to try to sync an Ethereum Full Node on the number one Single-Board Computer (SBC).

Syncing Ethereum has always been a pain point for many people because it’s a complex process with multiple options, including different verification modes which requires different setup that can cost a lot of money and takes weeks to sync.

Here is a summary of the different options available to synchronise the Ethereum blockchain with Geth (Go-Ethereum):


In this guide we will follow the second synchronisation mode, fast (with full garbage collection), to run a full-node on a RaspberryPi 4. Some people might ask what the benefits are of running your own node. Here are some examples:

We will start with an example of setup using a Raspberry Pi 4, a SSD and all the necessary components. But you can try alternative and equivalent solutions which should work depending on the following requirements:

As mentioned, the board is the latest Raspberry 4 (model B) - 4GB with the following specification: 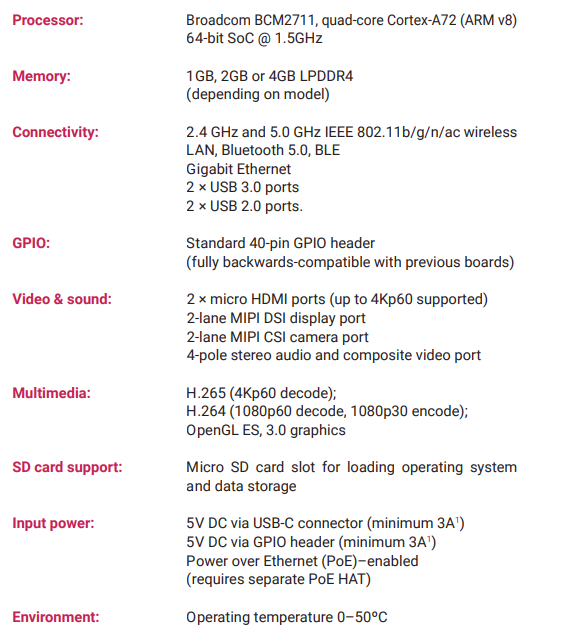 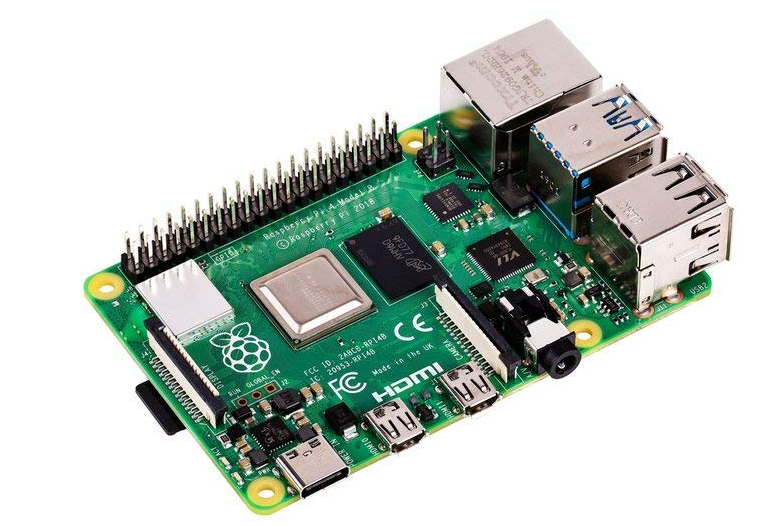 To host the operating system (OS), I use a SanDisk 16GB Ultra microSD

In order to store the large Ethereum state database, which requires very high Disk IO performance, we connect a Samsung SSD T5 (500GB) to the board via USB3.0. 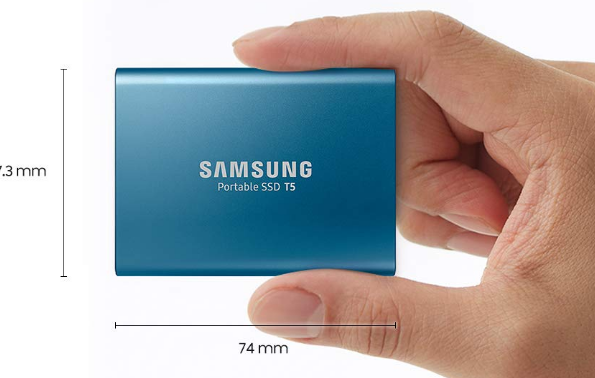 It is recommended that you use at least a 500GB SSD because the actual size of the Ethereum mainnet after a fast sync is about 200GB. That should give you a few years before rebuilding the whole thing on a larger disk.

Finally we use a 3.5A USB-C power supply to power up the SBC.

The total cost for this setup is $160 with an estimated annual recurring cost of $10/year for electricity. 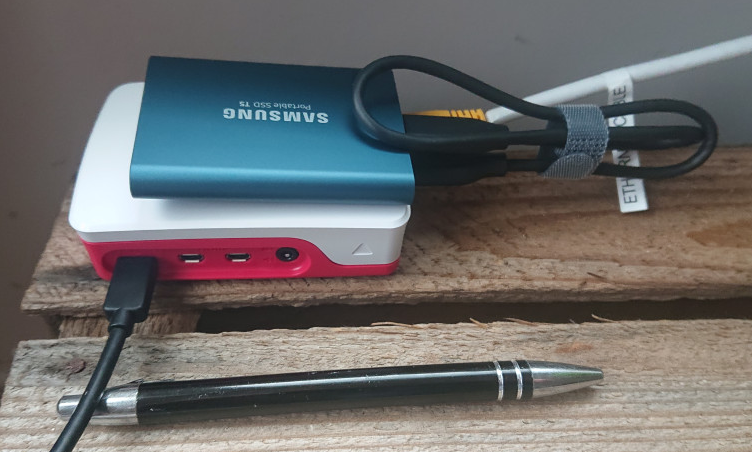 Result of the hardware installation

Install and configure the OS

In the first part of the installation, we are going to install the Raspbian Linux Operating System and configure it in a reliable and secure way.

1. Download the latest version of the Raspbian Linux OS for RaspberryPi

3. Plug an SD Card (minimum 8GB) into your laptop

4. Use Etcher and flash the image on the SD card 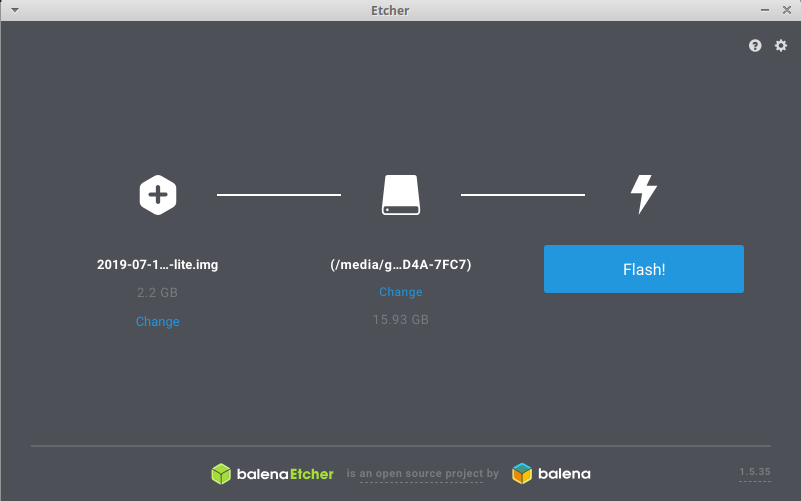 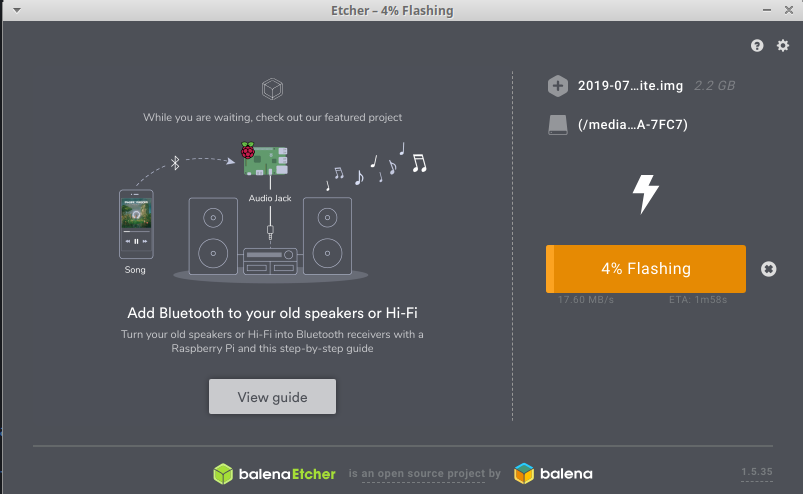 5. Once flashed, navigate to the folder /boot of the SD card and create an empty file ssh

6. Unplug the SD Card from your laptop and plug it to the Raspberry Pi

7. Plug the power to the Raspberry Pi as well as an Ethernet cable

8. Determine its IP address (default hostname of the machine is raspberrypi)

Your network router should provide the list of all the connected devices via Ethernet and WIFI.

9. Connect via SSH with default user pi and enter the default password raspberry

We enabled ssh by default during step 5, so it is possible to connect remotely via SSH from a Linux terminal (or using Putty if you use Windows) to the system.

The default password configured by Raspbian is well known, so it is highly recommended to change it to something else:

The default hostname attributed by Raspbian is raspberrypi, this can cause confusion if you have multiple devices, so it’s recommended to rename the machine with a more specific hostname related to its purpose.

Open the file /etc/hostname and replace the content by geth:

Upgrade the system in order to get the latest patches.

We are now going to configure the static IP 192.168.0.24 so the router won’t assign a different IP each time the Raspberry PI restarts.
You can either do this via your router DHCP configuration or directly in the network configuration of the machine or even both.

a. Assign a static private IP address to Raspberry Pi with a router

Go to your network router console and configure the static IP in the DHCP section.

b. Assign a static private IP address to Raspberry Pi with dhcpcd

Edit the file /etc/dhcpcd.conf and add the following lines at the end

In the second part of this guide, We will mount an SSD connected to one of the two USB3.0 ports.

As explained, only SSDs are fast enough (I/O speed) to sync Geth to the Ethereum mainnet. 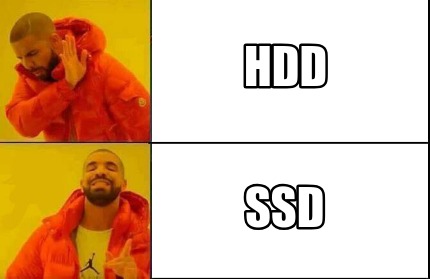 Run the command fdisk -l to list all the connected disks to the system (includes the RAM) and try to identify the SSD. The disk which has a size of 465.6 GiB and a model name Portable SSD T5 and located into /dev/sda is our SSD.

If you disk is new and just out of the package, you will need to create a partition.

You can manually mount the disk to the folder /mnt/ssd.

5. Automatically mount the disk on startup

Next step consists to configure fstab to automatically mount the disk when the system starts.

You first need to find the Unique ID of the disk using the command blkid.

Edit the file /etc/fstab and add the following line to configure auto-mount of the disk on startup.

Add this line at the end:

You can verify the disk is correctly mounted on startup with the following command:

6. Configure Swap on the SSD

Geth can consume a lot of memory during the syncing process so it is highly suggested that you create a swap file (overflow RAM) to prevent any kind of OutOfMemory error. It is also strongly advised to put the swap file on the fastest disk, which is the SSD in our case.

Before moving forward, your setup requires a very high-speed disk IO throughput. You can test the performance of your SSD disk using the following commands:

Below 50MB/s (write/read), I wouldn’t recommend trying to syncing a Geth node because you might never be able to reach the head and complete the sync.

Remove /mnt/ssd/deleteme.dat after the performance test.

In order to communicate correctly with other peers, Geth needs to accept connections on port 30303 from outside. You will to configure your firewall accordingly to allows for incoming requests on port 30303 to reach the machine via port-forwarding or port-triggering.

Install the following software which might be needed during the procedure.


**Recommended options to stabilise the node**

Edit /boot/config.txt and add or edit the following line:

Edit /etc/systemd/system.conf, and add or edit the following line

Now our system is ready for you to install and configure Geth.

a. Install and configure Golang

For a Raspberry Pi 4, we need to download Golang for Architecture ARMv6: go1.13.1.linux-armv6l.tar.gz

b. Install Geth from source

To install Ethereum client Geth, we will compile it from the GitHub source.

Remove --branch v<version> if you want to use the latest code (unstable).

We first need to configure Geth to synchronise in fast mode using the flag --syncmode fast.

Geth also has a --cache option which specifies the amount of RAM the client can use. Raspberry Pi 4 has 4GB RAM so we can use --cache 256 without running into Out Of Memory errors.

By default, all the data are stored in ~/.ethereum/geth/ located on the SD Card. We want to store the Ethereum data on the SSD. For that, we can use the option --datadir /mnt/ssd/ethereum to tell Geth to read/write the datastore on the SSD.

We want to run Geth as a service and keep the process running in the background after we close the session, and be able to recover from crashes automatically.
We need to install a systemctl service (systemd explanation)

The following command configure Geth to automatically start after a reboot.

We’ve installed and configured Geth, so now we have to wait a few days until the sync ends. In the meantime, let me share some insights about the syncing process and what’s going on under the hood.

First of all, in fast sync node, the syncing process is composed of two phases running in parallel: block sync and state trie download. Both phases need to be done in order to have a full node and switch to full mode where every transaction is executed and verified.

The block sync downloads all the block information (header, transactions). This phase uses a lot of CPU and space to store all the data. You can observe this process in the logs with the mention of “Importing block headers and block receipts”.

However, in fast mode no transaction are executed, so we do not have any account state available (ie. balances, nonces, smart contract code and data). Geth needs to download and cross-check with the latest block the state trie. This phase is called state trie download and usually takes longer than the block sync.
This phase is describes in the logs by the following statements:

The charts below shows some metrics during the syncing process. We an observe that once the block sync has finished, we are storing less data and consuming less CPU and memory. However, Geth is still downlading and writing the state entries at a high rate. Follow this article to learn how to monitor Geth with GoogleSheet.

During the process, you will observe some strange behaviours which are common to many people.

After exactly 3 days, 23 hours and 49 minutes we observed the transition from fast mode to full mode:

Then you should see

The website ethstats retrieves the latest state of the Ethereum mainnet in real time and we can compare to see if we are synced.

In conclusion, this article shows how simple and affordable it is to run a full-node on the Ethereum mainet and contribute to the good health of the network.

This guide began from a discussion about how hard it is to keep an Ethereum node stable and synced on a Single-Board Computer. So thank you for the interesting discussions and for your help in the last few weeks to make this experiment a success!